The National Hockey League (NHL) is known for the rivalries and fights that are witnessed on and off the pitch, and many people may see it as a modern problem. However, fights in the NHL have been there since the first rules were written in the 1800’s. The NHL issues long penalties to players who show aggressive behavior on the pitch, for example a player going after an unaware or an unwilling opponent or a player attacking an opponent with the stick.

Fist fights between two willing players are widely accepted in ice hockey and often seen as a tactic and a way of motivating one’s team, while at the same time intimidating the opponents.

History Of Fights And Rivalries 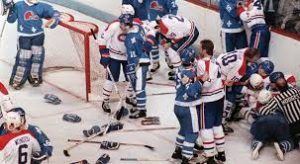 With players moving at speed while competing for the puck in a limited space, collisions while taking body positions are bound to happen. With the excitement it elicits within the spectators and the players, this physical game has been allowed to thrive.

With the spectators cheering when they saw a physical challenge during a hockey match and the officials doing nothing about it, it was agreed that some physical game was ideal for ice hockey. In 1992 a five minute penalty was adopted to penalize players who are found guilty of excessive body contact instead of them being sent out of the field during game play.

There has been a long discussion about fighting rules in hockey with opponents including medical practitioners, legal authorities, and journalists, among others calling for a review of the rules and stricter punishments. Many argue that the fighting keeps fans away from the game and may also hinder children from participating in junior ice hockey competitions. Those who support the debate have indicated the fact that fighting instances in the NHL league have reduced showing some change of attitude among players.